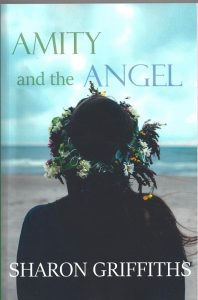 Amity and the Angel, June 2017,  is a What if..?  novel for Young Adults.   What if  the world was almost destoyed?  What if  the small society that survived was run on strict religious lines, if girls had to have as many babies as young as possible to re-populate the world?  What if books were banned – unless they were about diseases in pigs – and that music was forbidden  and dancing was the work of the devil?

Any girl would want to change that world – especially if she’d been brought up by a grandmother who could rememebr when the world was full of colour, music, stories and sparkly shoes… 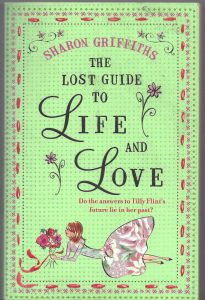 In a packed nightclub ,food writer Tilly Flint is the only witness when a  glamorous model leaps from a  window and escapes into the night.   Soon afterwards on a working trip in the wild Yorkshire Dales, Tilly and boyfriend Jake have a  blazing row, leaving Tilly alone in an isolated cottage.   It’s the last place she expects to see the model again – or the celebrity footballer Clayton Silver… 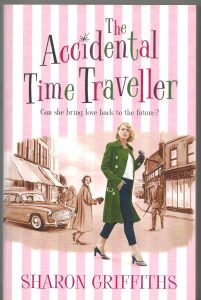 After breaking  up wiht boyfriend Will,  journalist Rosie Harford is sent to write about  a new reality TV show The 1950s House.   But when she gets there she finds she’s suddenly part of it, trapped in a world without  the internet, mobile phones, hair straighteners and Lycra, a world in which men are men and women make the tea.

What’s more, her boyfriend Will – a definite committment-phobe-   is there too, but in this world he’s married to Rosie’s best friend and a devoted dad.  Thrown together by work, Will and Rosie grow closer than ever and Rosie falls in love with him all over again. But now he’s out of bounds.

Unless she can get back to the present….

Published in The Netherlands as  Ouderwets Verliefd

Published in Spain as Pasado Imperfecto